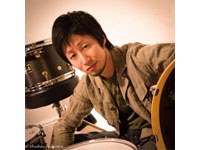 Takuma Anzai is an experienced session drummer and percussionist based in Boston, MA.
His performing and recording credits include award-winning producer Nicolas Farmakalidis of Neilaproductions (Marty Friedman, aika, Ayaka Hirahara), arranger/producer/keyboardist Adi Yeshaya (Aretha Franklin, Whitney Houston), EMI recording artist aika, Hanah (Universal music recording artist), Fresh Sounds Records recording artist Romain Collin, Mission Hill (Toucan Cove Records/Universal), actor/writer/musician Christopher Guest, producer/keyboardist Yukihiro Kanesaka (Darren Barret, John Blackwell), and many others.
Born and raised in Fukushima, Japan, Takuma took his first piano lesson at the age of 7. At the age of 11, after his older brother influenced him, Takuma started playing the drum set.
At the age of 15, Takuma had his first live performance with his junior high school classmates at their graduation party, and since then, he has been an in demand drummer. After performing in night clubs, concerts, festivals, and numerous recordings, his passion for music and learning drove him to the USA at the prestigious Berklee College of Music in 2004.
While at Berklee, Takuma studied with Dave DiCenso, Terri Lyne Carrington, Mark Walker and Jon Hazilla.
Takuma graduated Berklee College of Music with a degree in Performance. (2007)
Takuma has performed with a lot of artists and musicians from around the world, and he has developed his own unique style of drumming. He is a first call drummer due to his versatility, knowledge of many different musical styles and his professionalism.
Besides working on his solo career, Takuma joined many different bands in the USA including the award-winning band “Mission Hill” (Toucan Cove Records/Universal). He has shared the stage with Candlebox, Marcy Playground, WAR (Rock and Roll Hall of Fame), and Tim Reynolds & TR3 amongst many others.

Simply the best sounding and most versatile drum kit that I have ever played. Canopus drums have a very musical tone that easily blends in with any style. It is my pleasure to make music with these sonically fantastic drums. Thanks Canopus!!