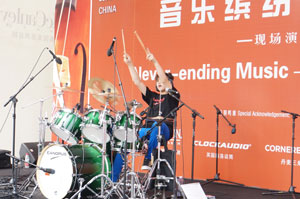 Kristofer, also known as Kris, is the drummer, lead singer and song-writer for the American Pop-rock band Nickris Brothers. Kris’ cool, eccentric personality has been a fan favorite, repeatedly earning him invites to shoot commercials for Toyota automobiles etc. Kris’ incredibly gifted drumming skills have earned him endorsements from the famous Swiss cymbal brand PAISTE, and Japan’s well-known drum brand CANOPUS. Often regarded as a musical genius, Kris has impressive vocal, song-writing, and music-production skills. Along with his brother Nick, Kris has written hundreds of demos, and has produced many of his own songs. In addition to singing and music production, Kris also served as the producer of Nickris’ self-made video programs “Teenage Talk Show” and “The Voice PK”.

Nickris is an American Pop-rock brother band famous in China for performing in many television shows and festivals. Nick, 14-years-old, is the guitarist, pianist, and singer of the band. Nick also wrote and produced a majority of Nickris’ songs. Kris, 12-years-old, is the drummer, guitarist, and rapper of the band. Kris has been regarded as the youngest endorsed drummer in the world. Together Nickris has produced many songs and also created and produced their own internet talk show, “Teenage Talk Show” on Youku.