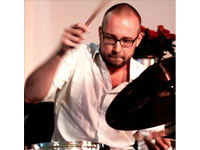 Marcus Möller was born in husum / germany in 1975. playing drums since he was 4 years old, he studied drums with joop van eerven and rene creemers in arnhem netherlands, graduating in 2002. he has since then performed with a great number of different artists in pop-, rock- and jazzsettings, for example marla glen and bonita. he also recorded several cds with his own bands and also done a lot of studiowork in the cologne/bonn area in germany, where he a is very sought-after sideman, well known for his ability to play in a great variety of styles and feels.

Playing vintage instruments for quite a while can get on your nerve when it comes to hardware and durability. searching for a really musical alternative led straight to canopus. their drums have the depth, the warmth, the very tone of old drums - but without the kinks. thanks to canopus for making such beautiful instruments!