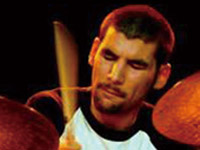 My first hit on a canopus snare and I was in love with that drums.
I am happy and proud to play these drums and would recommend them to any drummer who is
looking for a different sound wich hardly exist today anymore.