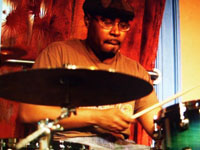 Tyrel has been playing the drums since the age of 15. He started out playing in church where his father is the pastor, their he learned how to create music and feel the music.
Later Tyrel began to play with many local community choirs, and groups. His professional career started with grammy and stellar award winner John P Kee, Shirley Ceasar and Kim Burrell.
Now you can see Tyrel on the road with many renown artist such as Benita Farmer, Jazmine Sullivane, Brett White, Stephen Hurd, Oliver Johnson, Black Reign, Chubb Rock, Eric Roberson and many more.

I started out using puresound snare wires, but I wasn't happy, I found out about Canopus snare wires from the living legend Carmine Appice.
I tryed the wires out at the 2008 namm show with Takushi. I described to him the sounds I heard and he matched me up with the vintage wires which gives me a dry pop which is great for jazz, r&b, gospel and my favorite latin.
If you want fast response, great sound choose vintage.