Ibrahim Maalouf, Aka Moon, (the mystery of) Kem 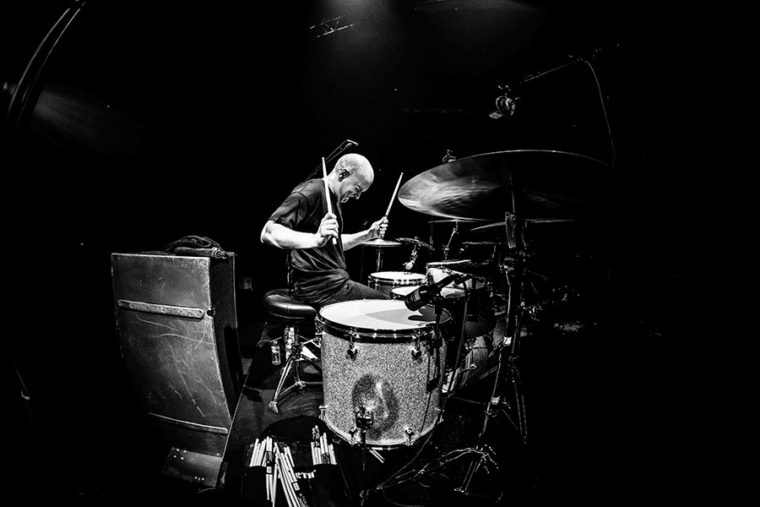 Stéphane Galland was born into a musical family and received his first drum set at the age of three. He decided to take lessons in classical percussion when he reached the age of nine, at the conservatory at Huy (Belgium) and started playing jazz with his fellow pianist Eric Legnini two years later. At the age of 13, having had the opportunity to play with the best jazz musicians in Belgium, he developed a growing interest in this musical field. Always in search of new musical experiences, he met Pierre Vandormael, Fabrizio Cassol and Michel Hatzigeorgiou, and later with the last two, formed the band called AKA MOON. The band, which recorded over 20 CDs and performed worldwide (Europe, Africa, Asia, the United States, Canada, South America, India…), has been a unique and invaluable field of development and experimentation with different musical traditions. This led Stéphane Galland to record and perform with the Malian star Oumou Sangare, Senegalese master Doudou N’diaye Rose (Miles Davis, Rolling Stones, Peter Gabriel…), the Great and undisputed South Indian master of Mridangam Umayalpuram K. Sivaraman, the Turkish master of percussion Misirli Ahmet, and many different artists from Africa, India, Asia, Europe and America.

In the summer of 2011, he founded his own project called “LOBI”, exploring multiple ancient musical traditions in a modern, futuristic and alchemistical approach. Stéphane Galland’s “LOBI” is a meeting of some of the most sought-after musicians today, coming from different traditions: Magic Malik on Flute and Vocal (Guadeloupe/Ivory Coast), Tigran Hamasyan (Armenia), Petar Ralchev (Bulgaria), Misirli Ahmet on percussion (Turkey) and Carles Benavent on bass (Spain).

In 2018, he will release an album and tour with his second new personal project called “(the Mystery of) KEM” featuring musicians from the new generation as well as one of the greatest Carnatic flute player today, from Bangalore (India), Ravichandra Kulur (Ravi Shankar, Anouschka Shankar).

Other than that, Stéphane Galland has been playing and recording with numerous famous artists from different horizons including Joe Zawinul (Zawinul Syndicate), Joe Lovano, Toots Thielemans, Philip Catherine, Mark Turner, Kurt Rosenwinkel, Robin Eubanks and singers Ozark Henry, David Linx, Axelle Red, Zap Mama, Novastar as well as many different groups using new developments in rhythm and harmony such as Dhafer Youssef, Nguyên Lê, Nelson Veras, Malcolm Braff. Stéphane was the drummer for many special projects including African Voices (with Oumou Sangare, Me’shell Ndegeocello, Baba Sissoko), Aka Moon & 600 children (with a unique gathering of a 600 Children choir), Homage to Jaco Pastorius (with Toots Thielemans, Othello Molineaux, Felix and Julius Pastorius, etc….), to Jeff Buckley (with Marie Daulne (Zap Mama), Kris Dane & David Linx), Homage to Friedrich Gulda with Martha Argerich, Alexander Rabinovitch and Gautier Capuçon, Philippe Boesmans’ opera “Wintermärchen” (on Deutsche Grammophon), Anne-Teresa de Keersmaeker Rosas Dance Company “In Real Time” and more than 260 shows with Alain Platel’s widely acclaimed “VSPRS” and “Pitié!”. In January 2014, Stéphane Galland joined Ibrahim Maalouf for his worldwide tour “Illusions” for which Maalouf received the “Victoire de la musique” for best world music album. Then participated in his unique project around “Alice in Wonderland” together with French rapper Oxmo Puccino, followed by the album “Red & Black Light” for which he also participated in the arrangements of the songs, and that has been awarded best music show at “Victoires de la musique” 2017 in France, and made a huge tour ending at the famous Accord Hotel Arena (ex-Bercy) in Paris recorded live for an upcoming album and DVD, in front of 17.500 people. He was part of the creation of a brand-new project called “Levantine Symphony” premiered at the Kennedy Center in Washington DC, which featured also the orchestra from the Washington DC opera house, as well as a children choir from New-York city.

He has been teaching drums, rhythm and ensemble in different schools and conservatories in Brussels (KCB) and Antwerp, Belgium for many years, and is regularly invited to give seminars, Clinics and Master classes worldwide.

Lately, Stéphane has been celebrating 25 years together with his band Aka Moon, that released a box with 20 albums (from their first release “Aka Moon” in 1992 to today) as well as a brand-new record called “NOW” acclaimed by the main French and Belgian press.

Stéphane Galland was selected this year by the French magazine “Batterie Magazine” as one of the top 10 drummers of 2018 worldwide.

Ibrahim Maalouf, Aka Moon, (the mystery of) Kem