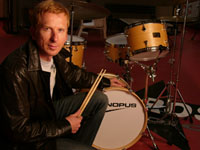 Laurent Bataille is a very active jazz and pop drummer in France. After his studies at the Berklee College of Music in Boston, he played with a lot of bands and rythm sections, from the trio context to big band. He had the honor to play several times with great jazz soloist like Eric Alexander, Sam Newsome, Antonio Hart, Dan Faulk, Myron Walden, Eddie Henderson, Peter King, Antonio Farao and many other great jazz artists. Since 2006, he’s part of the Geraldine Laurent “Time Out Trio” (one album on Dreyfus Jazz) with bass player Yoni Zelnik. He played in all the great festivals in Europe, and travelled with the “Time Out Trio” in such countries as Japan, Corea, Philippines, Russia, Africa and China. He’s also a journalist for Batteur Magazine as well as for Jazz Magazine and he adapted in French the publication “Drum For Dummies”.

To me, Canopus makes simply the best drums and best hardware that can be done ! How could a drumset be better ? I tried all the other brands, but the philosophy of Canopus, as well as the global conception of the making process really persuade me, and I'm now really proud to play these drums.