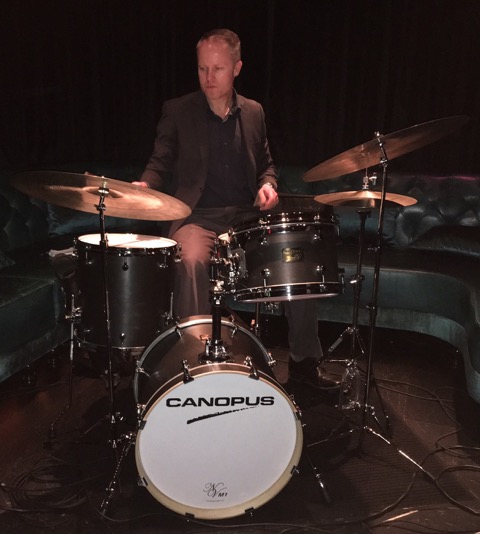 Kristian Braathen has worked as a professional musician for more than twenty years. During his formative years, Kristian studied privately with Vancouver drummers and educators, Don Reid and Scott Robertson. Following a year living and performing in Mexico, Kristian attended Capilano University where he majored in music and earned a Bachelor of Music Degree in 2004. While at Capilano University, he studied with percussionists Ken Moore, Graham Boyle and Craig Scott as well as studying jazz drum set with Dave Robbins and Blaine Wikjord. Following his studies at Capilano University, in 2005 Kristian travelled to Los Angeles for a study intensive with world renowned jazz drummer, Jeff Hamilton (drummer with Oscar Peterson, Diana Krall). Between 2010-2015, Kristian studied with classical percussionist Aaron MacDonald (VSO) and in 2017 Kristian received a B.C. Arts Council Grant to travel to New York City to study with legendary Jazz drummer Kenny Washington (Tony Bennett, Bill Charlap).

During a hiatus from his studies at Capilano University, Kristian travelled the world with several cruise line companies from 1998 to 1999. In addition, he toured extensively in Canada and the United States with the Russell Jackson Band (former bassist with BB King) from 2000 to 2003. While on tour, he shared the stage with such names as renowned jazz saxophonist Donald Harrison (Art Blakey and the Jazz Messengers, Terence Blanchard,) and Matt ‘Guitar’ Murphy (The Blues Brothers.) Kristian also has extensive experience as a pit orchestra musician for several musicals, including ‘Avenue Q’ (Arts Club Theatre) and ‘Little Shop of Horrors’. From 2008 to present, Kristian has led his own jazz trio, The Kristian Braathen Trio, which performs regularly in the Vancouver International Jazz Festival. In 2015, he released his debut CD, ‘Tempus Fugit’, which featured two of Canada’s finest jazz musicians, pianist Miles Black and bassist, Jodi Proznick. Kristian wrote all of the arrangements as well as composed new music for this debut recording. In addition to regularly performing with his own trio, he also performs regularly with many other musical ensembles in Vancouver in the styles of Jazz, Rock/Pop and Blues Music. As well as working as a performer and a studio musician, Kristian has worked as a private music instructor since 2000, specializing in snare drum, drum set, mallet percussion and music theory.