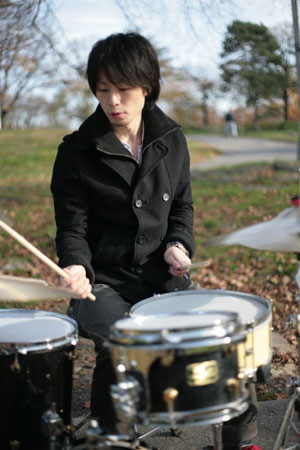 Jun is one of the most versatile Drummers/Composers working professionally in the United States and Japan.

In 2002, he was offered a full scholarship to study music at Senzoku Gakuen University, the most prestige university in Japan. At Senzoku, he studied per formance, harmony, composition, and arranging, improving through concerts, recording sessions. After two years of study, he was accepted a scholarship to Berklee College of Music and continued to perform and study.

In fall 2005, Jun moved to Boston and started his second chapter of his musical life at Berklee. There, he studied the drum set with Terri Lyne Carrington, Kenwood Dennard and Mark Walker, and studied percussion with John Ramsey, Ernest Diaz, and also studied marching snare technique with Richard Flanagan and Larry Finn. In his second year, he felt a need for studying not only performance, but also Composition and Arranging skills to create his own sound and also to improve his musical skills. He then took many composition classes from Jazz Composition major.

After graduating in May 2008, Jun has been showing so much versatility in musical styles such as Jazz, Funk, Gospel, R&B, and Rock. He was heavily involved in various bands at numerous venues, conferences, and recording projects across the country. He performed with many great musicians such as Joe Lovano, George Garzone, Frank Tiberi, Darren Barrett, Akili Jamal Haynes, Hal Crook, Alain Mallet, and Jim Odgren at the numerous famous venues in the Boston area.

I had the honor of being an endorser for this great drum company. Canopus is truly amazing drums, and I see the people from Canopus are really honest in making their products. I recently got the "Club Kit". Toms and bass drum are smalls size, but still has a warm, deep sound like a regular size. I recommend this kit for not only a small venue but also any other place, any kind of musical situation. Thank you all for your support at Canopus drums.