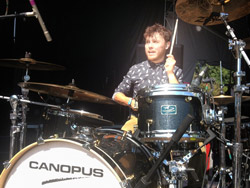 Jay Sikora has recorded and toured with a number of artists including Badly Drawn Boy, Willy Mason, Emiliana Torrini, Diane Birch, Oh Land and Ivor Novello-nominated singer/songwriter Stephen Fretwell.
More recently, Jay has been touring with Lianne La Havas and recorded with her on the album, “Is Your Love Big Enough?”, which debuted the UK chart at #4 and was named iTunes Album of the Year in 2012.
La Havas’ extensive promotional schedule has sent Jay on sold-out tours around the world, with memorable festival performances at SXSW, Montreux Jazz, North Sea Jazz, Nice Jazz, Glastonbury, Sydney Festival and New York City’s Central Park along the way. A personal shout out from David Letterman after performing on The Late Show and post-gig meetings with Stevie Wonder and Prince were other highlights in an exceptional year.
Born to a British father and Peruvian mother, Jay started playing the drums at the age of 14 and was self taught until his Dad encouraged him to enroll at Drumtech, London, in 2001. He won the ‘Best Overall Student’ award there and was subsequently offered a place at Paul McCartney’s Liverpool Institute for Performing Arts (LIPA), where he went on to graduate with a 1st class honours degree in Music.
Jay is currently touring with Paolo Nutini.

Since I started drumming, I’ve been playing vintage drums. When it came to considering a new kit, nothing came close to the sound and craftsmanship of Canopus drums...they’re ace!