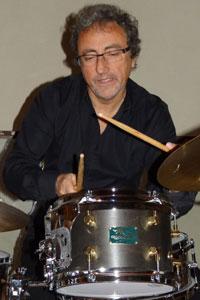 Born September 26, 1961, he studied at the Conservatory of Marseille between 1977 and 1980, in classical percussion class. Self-taught drummer, he cut his teeth in his father’s jazz club in contact with the biggest as Kenny Clarke, Max Roach, Art Blakey, … At the age of 15 he played regularly in clubs and is rapidly taken him along with many soloists: Eric Barret, George Arvanitas, Jean-Loup Lognon, Lou Bennet, Peter King, … By 1980, he performed on national and international stages with renowned artists such as Didier Lockwood, Alain Jean-Marie Andre Villeger, Barney Willen, Christian Escoudé … In the 90s he moved to Paris and is quickly becoming one of the major drummers of the French stage. He occurs on the biggest stages in France and abroad in bands such as:

He is the drummer in the orchestra led by Patrice Caratini for the resumption of the recording of “Anna Livia Plurabelle” from Andre Hodeir.

I am very happy to play on Canopus drums. the manufacturing quality and finish are tremendous and Canopus drums have a wonderful sound.