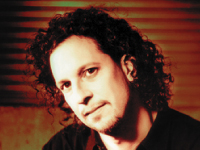 I truly appreciate the world class hand crafted drums that Canopus makes. Every attention is paid to the finest detail producing a top notch instrument that allows you to express yourself in an individual way.