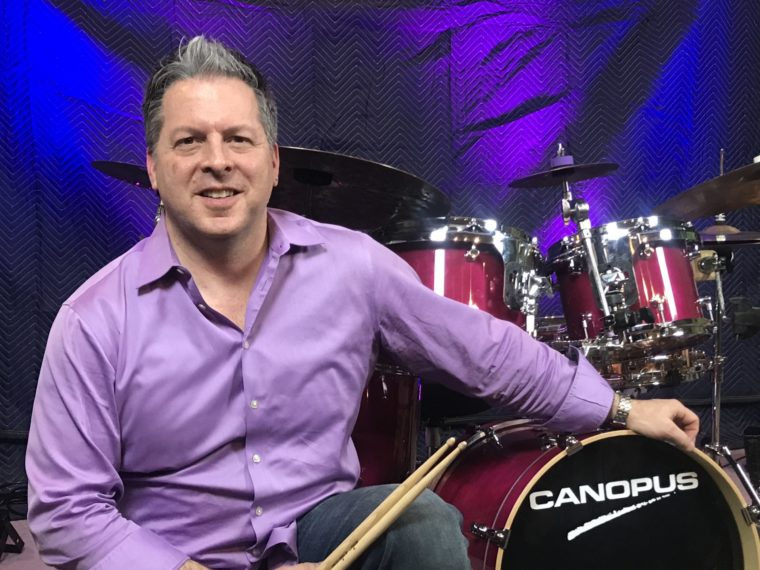 Born in Cincinnati, Ohio into a family of professional musicians it is no surprise that Brian found himself drawn to the origin of all music: Rhythm. His father is a woodwinds specialist and his mother a vocalist and pianist. The house was filled with the sounds of his father’s constant practicing and his mother’s piano and voice students. After nearly being put up for adoption due to his constant banging on inanimate objects, his parents decided to embrace their obstreperous sons undeniable talent by purchasing him a drum set and themselves earplugs.

While living in the Midwest, Brian’s diverse range of styles led him to performances with Rock and Roll Hall of Fame members Little Anthony and the Imperials, as well as Tony Award winner and Broadway star, Faith Prince. Brian has also shared the stage with such artists as Leroy “Sugar” Bonner from The Ohio Players, blues greats Sam Myers and Lonnie Mack and television and movie star, Woody Harrelson.

Brian’s growing interest in Latin music and culture brought him to the San Francisco Bay Area in early 1999. He quickly began working with numerous local Salsa, Afro-Cuban, Latin funk, Latin jazz, and Tex-Mex groups. In 2000, Brian was asked to join the band of San Francisco Bay Area Icon, Dr Loco (Dr Jose Cuellar). Brian continues to perform with him in both The Rockin’ Jalapeno Band and Los Tiburones Del Norte. Through working with Dr. Loco, Brian was asked to record the original music soundtrack for the critically acclaimed Robert M. Young film, Alambrista: Directors Cut, along with Grammy nominated producer and musician, Greg Landau. Brian also performed with “The Father of Chicano Music” and National Medal of Arts recipient, Lalo Guerrero, prior to his passing.

In addition to his performance schedule, Brian maintains a private practice in drum set and percussion instruction. He also conducts clinics and lectures on the history and culture of the drum set and percussion in Afro-Cuban music, His lesson “Clave in Odd Meters” was featured as a Master Class article in the November 2014 issue of Downbeat Magazine. Brian is now a contributing writer for DRUM! Magazine. This includes his monthly Afro-Caribbean Practice Pad column as well as corresponding video lessons for their online presence.

In 2007, after spending his career as a sideman, learning and honing his craft, Brian stepped into the role as bandleader. The San Francisco Bay Area was introduced to The Afro-Cuban Jazz Cartel. Featuring Grammy Award Winning musicians as well as esteemed Music Educators, the group continues the rich heritage of San Francisco Bay Area Latin jazz. Incorporating the rich harmonic and improvisational elements of jazz with the irresistible rhythms from the Caribbean to form “the perfect combination”. The ACJC has become one of the top Latin jazz groups in the Bay Area. With the release of their debut CD, Drummer’s Speak, their 2013 recording, San Francisco, and their 2016 release This Could Be That, they have made a name for themselves performing regularly in the Bay Area and touring in the Midwest.

In 2019 Brian formed Trio Latino, featuring original compositions and arrangements by pianist Christian Tumalan and bassist Aaron Germain. The Latin jazz trio will record their debut album in April of 2019.

In the 2015 Downbeat Magazine 80th Annual Reader’s Poll, Brian was voted into the top 20 in the Drummers category.

Brian is an official Bosphorus Cymbals Artist and a Canopus Drum Company Endorser.

Whether as a bandleader or as a sideman, Brian continues to perform at a high level, always welcoming new opportunities for expression and creativity while maintaining the protocol of a professional artist.