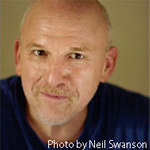 Adam Nussbaum grew up in Norwalk, Connecticut and started to play drums at age 12 after studying piano for 5 years, also playing bass and saxophone as a teenager. He moved to New York City in 1975 to attend The Davis Center for Performing Arts at City College.
While there he began working with Albert Dailey, Monty Waters, Joe Lee Wilson, Sheila Jordan and he played with Sonny Rollins in 1977 in Milwaukee. In 1978 he joined Dave Liebman’s quintet and did his first European tour with John Scofield. During the early eighties he continued working with John Scofield in a celebrated trio with Steve Swallow. In 1983 he become a member of Gil Evans Orchestra and played with Stan Getz as well. He later joined Eliane Elias/Randy Brecker Quartet, Gary Burton, and Toots Thielemans. In 1987 he began touring with the Michael Brecker Quintet. In 1988 they recorded the Grammy winning “Don’t Try This At Home” During 1992 he was part of the Carla Bley Big Band and that same year John Abercrombie hired him to complete his organ trio.
Since then he has kept active in a wide variety of groups. Among them a recently formed quartet ‘B A N N’ with Seamus Blake, Jay Anderson & Oz Noy, A co-op quartet “NUTTREE” with Abercrombie, Jerry Bergonzi & Gary Versace, The James Moody Quartet, ‘We Three’ w/ Dave Liebman & Steve Swallow, Eliane Elias Trio and also busy maintaining an active freelance schedule. Adam has taught as an Adjunct professor at New York University, the New School and State University of New York at Purchase. He also does clinics and master classes around the world.