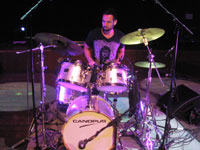 Tomas Fujiwara is a Brooklyn-based drummer and composer. Described as “a ubiquitous
presence in the New York scene…an artist whose urbane writing is equal to his
impressively nuanced drumming” (Troy Collins, Point of Departure), Tomas is an
active player in some of the most exciting music of the current generation, with his
band Tomas Fujiwara & The Hook Up; his collaborative duo with cornetist Taylor Ho
Bynum; the collective quartet The Thirteenth Assembly (with Bynum, guitarist Mary
Halvorson, and violist Jessica Pavone); and a diversity of creative sideman work with
forward thinking peers like Matana Roberts, Amir ElSaffar, and Matt Mitchell. In The
New York Times, Nate Chinen writes, “Drummer Tomas Fuijwara works with rhythm as
a pliable substance, solid but ever shifting. His style is forward-driving but rarely blunt or
aggressive, and never random. He has a way of spreading out the center of a pulse while
setting up a rigorous scaffolding of restraint…A conception of the drum set as a full-
canvas instrument, almost orchestral in its scope.”
In describing Tomas Fujiwara & The Hook Up, Jim Macnie of The Village Voice
says, “The drummer has named his latest band appropriately. Ensembles can go
anywhere if the intra-group chemistry is cooking…Fujiwara sounds like he’s got his
mates on speed dial.” Featuring trumpeter Jonathan Finlayson, tenor saxophonist Brian
Settles, guitarist Mary Halvorson, and bassist Trevor Dunn, the band’s first record
(Actionspeak, 482 Music) was named one of the best debuts of 2010 by the New York
City Jazz Record and received a four-star review in Downbeat. The group’s second
album, The Air is Different, was released on 482 Music in May of 2012.
Born and raised in Boston, MA, Tomas studied with legendary drummer and teacher
Alan Dawson for eight years before moving to New York at the age of 17. He is currently
a member of ensembles led by Bynum, Halvorson, Matana Roberts, Matt Mitchell,
Amir ElSaffar, Mike Reed, Matt Bauder, Josh Sinton (Ideal Bread), Sunny Jain (Red
Baraat), and Matt Welch, in addition to projects with artists such as Anthony Braxton,
Roswell Rudd, Tim Berne, Marty Ehrlich, and Michael Formanek, and has performed at
festivals and venues across North America, Europe, Asia, and the Middle East. Tomas
also has many experiences outside the jazz realm, including a five-year run with the
Off Broadway show Stomp and performances with the Tony Award winning Broadway
musical Fela!, featuring Patti Labelle and members of Antibalas.

I have always loved playing Canopus drums. They are beautifully crafted instruments with a very personal and deep sound.