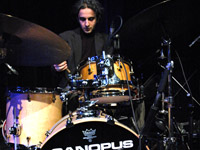 Simone Prattico was born in Rome, Italy. He started playing drums at the age of five playing along to Motown artists such as Marvin Gaye and The Temptations. His passion for groove was also heightened from an early age by listening and playing to Art Blakey records as well as albums by Weather Report or The Chic. This early experience of discovering music purely by ear gave him an instinctive feel for playing and understanding different styles of drumming. At the age of eight, he started taking drumming lessons from Roberto Spizzichino. While still at high school, he began playing his first gigs and earning his first wages as a musician accompanying various Italian pop artists. Since then he has kept up a busy schedule of studio work and live performances as well as recording extensively in the field of soundtracks, cinema and commercials. Today he is based in Paris where he can dedicate himself to his ongoing passion for jazz, funk, Brazilian and Afro styles collaborating and travelling to perform with many important international artists.

Canopus drums have a unique voice and sound. When I play them I feel all the passion and dedication that goes in to the making of each and every drum they put out. It's a passion that you feel not only in their instruments but also when I chat with the Canopus staff. They are one with their drums!