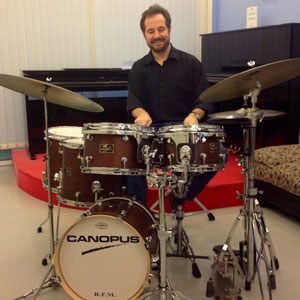 For more than 20 years Shawn Kelley has been based in South East Asia where he has developed and maintained a reputation as a highly versatile and virtuosic drummer, able to span the entire dynamic spectrum of Jazz, from the most sensitive nuance to the most driving and explosive of drum solos. He has toured, recorded and performed with a diverse range of incredible artists such as Ernie Watts, James Moody, Toots Thielemans, Roberta Gambarini, Tony Lakatos, Kirk Lightsey, James Morrison, Carmen Bradford, Terumaso Hino, Tony Monaco, Eldee Young, Phil Perry, Eric Marienthal, Leroy Jones, Nancy Kelly, Charito, Jeff Lorber and Vanessa Rubin to name a few. Shawn is featured on Jeremy Monteiro’s new Soul-Jazz upcoming release “The Jazz-Blues Brothers” along side Alberto Marsico, Eugene Pao and Shawn Letts. Shawn will be touring with the group in support of the new CD later this year.
When off the road Shawn keeps busy at his home base in Bangkok Thailand performing locally, lecturing at several universities, and maintains a private teaching practice.
Shawn was born and raised in Syracuse New York, and is a graduate of The City College of New York where he studied under the tutelage of Ron Carter, John Lewis, and Sonny Igoe. After years of playing in the New York Jazz scene, Shawn relocated to the warmer climates of Asia, where his love and command of all kinds of music has led him to work with a huge range of artists, encompassing a wide variety of styles.

My Canopus Drums have a beautiful musical tone, they help me to play my best, they sound great in all styles of music, and are truly a joy to play. Thank you for making a wonderful instrument that makes me smile every time I sit down to play!