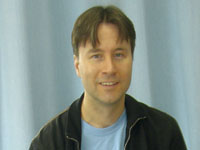 Scott Goulding, Drums. An internationally recognized Jazz performer, recording artist, and educator, he has appeared as a sideman on over 40 CD releases on labels in the U.S., Europe and Japan, including releases with Jerry Bergonzi and Larry Grenadier. Scott has recorded at the world famous NYC studios Avatar and Sear Sound with James Farber as the engineer.

He currently holds the drum chair in the critically acclaimed Yoko Miwa Trio, lead by pianist and JVC Recording Artist, Yoko Miwa. The trio was voted Top Jazz Act in the 2012 Boston Phoenix Best Music Poll. For more than a decade, Scott has been the drummer for piano legend Harvey Diamond in his trio and quartet with vocalist Hannah Rose Diamond.

Scott is an active Jazz Educator conducting private lessons at his own drum studio for the past 19 years. He is also on the percussion faculty of the Brookline Music School.

Scott is an artist endorser for Canopus Drums.

I play the Canopus Neo Vintage Series NV 60-M1. They are a tribute to the legendary Round Badge Gretsch Drums from the 60's except the NV 60-M1 series have a greater range of tuning possibilities as well as a wider dynamic range. Essentially, Canopus has brought these historic drums into the 21st century, maintaining all the desirable qualities of vintage drums while be able to function in a modern setting.