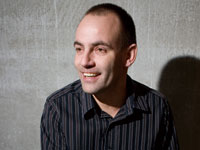 Roy Dackus started to play drums at a young age following his father who was a professional drummer. In 1987 he graduated from the Conservatory of Amsterdam. During the years he has performed and recorded with very different artists and orchestra’s including Art Farmer, Toots Thielemans, Randy Brecker, Richard Galliano, Charly Mariano, 70-ties rock band Focus, The Metropole Orchestra directed by Vince Mendoza, Jazz orchestra of the Concertgebouw and his own group the European jazz Trio.

My Canopus drumset has that particular sound a drummer is looking for. An open rich tone, great dynamics and easy to play in every musical setting.
Canopus, the drums with Japanese care and precision.