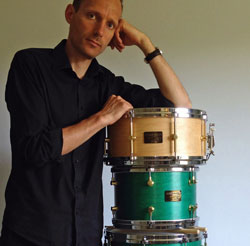 In 1990, Österstam enrolled as jazz student at Skurups Folkhögskola, where he soon found personal and musical fellowship in class mate Klas Nevrin. A couple of years later, the two carried on their collaborations in Stockholm, experimenting on duo and playing with musicians like Fredrik Ljungkvist, Amit Sen and Martin Küchen.
On moving back to Skåne in 1996, Österstam played in different constellations with guitar player and rhythm guru Mulle Holmqvist, a work that resulted in touring Swedish prisons as well as recording cult record ”Parafras”. In 2000, Österstam began a 5-year exile from jazz, in favor of raising a growing family, running a vegetarian restaurant and playing Indian percussion. Returning to jazz and improvisation, Österstam also started teaching. His work with children is much appreciated and tends to be pivoting around elements of improvisation and spontaneous music. Constallations that emerges as most important in Österstam’s musicianship at the moment is the duo with keyboard player Robin Skarin called Robric’s Nest and the Klas Nevrin Ensemble, featuring american violinist Katt Hernandez and legendary reed player Per “Texas” Johansson.

Like most drummers I’ve played many great drum kits, all of them displaying a balanced and contained sound that works well for most situations. In my Canopus kit though, I’ve found an instrument with a definitive personality, a will of its own that takes me by surprise and inspires me again and again!