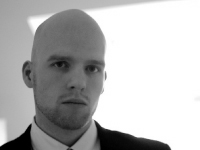 Paul Kaiser was born and raised in Germany.
In 1999 he moved to Los Angeles to study at the L.A. Music Academy with Joe Porcaro, Ralph Humphrey and Mike Shapiro among others.
He also studied privately with Mark Schulman and Dave Weckl.
After graduating in 2000 Paul stayed in L.A. and quickly started making a name for himself playing with musicians like Eric Marienthal, John Pena, Russell Ferrante, Gary Meek and many L.A. based Pop and Rock Bands.
He also worked with Producers/Engineers Ed Thacker (Ray Charles, Rod Stewart) and Brandon Mason (Branford Marsalis, Don Byron).He also was a drum instructor at the L.A. Music Academy.
Since 2007 Paul has been back in Germany and now lives in Hamburg. He plays with a wide variety of artists in the Pop, Rock and Jazz Scene.

Canopus drums have it all: The sound, feel and look I've always been wanting when playing a drumset. The drums are a real work of art and simply sound amazing! For the first time I feel 100% "at home" with a drumset!