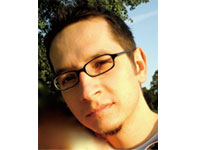 I love to play Canopus instruments, the drums, the quality and the sound = THE REAL THING!! I´m so happy to play these instruments on every gig... THANK