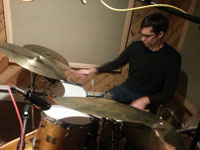 Matt Slocum began playing the drums at age 11 and while in high school was deeply inspired by the music of Max Roach and Philly Joe Jones.
In 2000 he received a full scholarship to attend the Thornton School of Music at the University of Southern California where he studied with Peter Erskine.
After graduating in May 2004 Matt developed into one of the most in demand creative musicians on the West Coast.
He has performed and/or recorded with a wide variety of artists including Seamus Blake, Alan Broadbent, Bill Cunliffe, Taylor Eigsti, Sara Gazarek, Larry Koonse, Wynton Marsalis, Alan Pasqua, Bob Sheppard, Anthony Wilson and the Dallas Symphony Orchestra.
He moved to New York in fall 2007 to explore the fertile musical environment.

Canopus approaches making drums the same way great improvisers play music-with integrity, commitment to the highest standards, understanding of the history of the art form, and the ability to create something new with a personal and unique sound.
The Neo-Vintage series offers a pure tone, clarity and resonance even when tuned high.