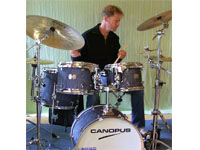 Luke Adler is presently the drummer for Kilimanjaro, the Vermont-based jazz band that recently released their long awaited CD Homecoming which quickly became one of Jazziz Magazine’s 2009 Critic’s Choice picks. From 1992 to 1999, Adler played with the Unknown Blues Band, the blues oriented alter-ego of Kilimanjaro. Luke has had the pleasure of playing and recording with some of the industry’s finest musicians including percussionist Lenny Castro, Hammond B3 organist Joey DeFrancesco, bassist Scott Ambush, guitarist Steuart Smith, and the late, great Keter Betts. Luke studied with both Boston Pops timpanist Fred Buda and teacher/clinician Gary Chaffee.

I absolutely love the clarity and sensitivity of my new Birch Canopus Drums. I am honored to play such great drums and can hear and feel the quality every time I sit behind my new kit. Thank you Canopus for making drums that encourage creativity and help me hear new ideas.