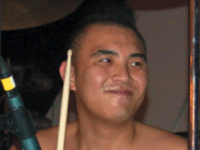 Nationality : Korea
He was born in Seoul, Korea in 1972. He has been playing with various musicians and singers in Korea. He has a great nick name ‘Animal’. When we see him play drums, we can know why he is called ‘Animal’. He is one of the most energetic drummer in Korea. He is now playing in ‘Yu,Jin,Park Band’

When I first played Canopus drums, I said 'That's it! This is exactly what I've been waiting for~!' There are many good drum makers in the world. But Canopus! I'd like to say 'There's something special about Canopus!!!