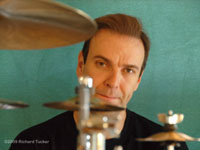 Jonathan Bradford, never one for conformity marches to the beat of his own drum. It all started back on a midsummers day upon first listening to “Bring On The Night” by The Police. He was the mere age of eight, and since then has never looked back. “Musical drumming” as he calls it, came very easy to him. And at the very incarnation of his first band was already behind the microphone. Playing drums more like percussion rather than trap set gives him the uniqueness over his contemporaries. Looking for more than just a back beat which is redundant in the American market, sent his mind overseas to “Mother Africa”. And thus being the true student of his craft, put 15 years in the study of tribal drumming. Inspired by several African drummers, he acquired his polyrhythmic as well as eclectic drumming style. His unique drumming style is also influenced by Stewart Copeland, Bill Bruford, and Vinnie Colaiuta. In addition to playing drums, he sings and composes his own music using piano, guitar, and bass in various styles.

I was on a quest looking for the best tone and I found it. Truly wonderful drums and my DW's are packed a way collecting dust. I love these drums so much producers and artists alike are amazed at the quality and the "pure tone" I get with these drums. Thanks for a superior product I shall be an endoser for years to come.