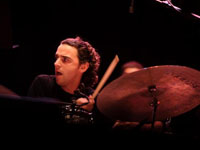 Carlos López has studied at Berklee School of Music (USA), Drummers Collective (USA), Taller de Music (Spain) and ESMUC (Spain). He has performed with a large number of artists such as Gilberto Gil, Benny Green, Bob Mover, Raynald Colom, Bred Wiltmore and Abe R?bade, among others. In addition, he plays with 08001, a world music collective from Barcelona with whom he´s currently touring around Europe and also leads his own band with whom he has released two CDs “CLQ” and “The Last Minute Experience”. As a composer, he won the first prize in a composition contest organized by the spanish authors society in 2006.

The first time I played with Canopus I was wonder about the sound quality and the great looking of every kit. I'm relly proud to be part of the Canopus family.