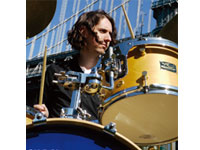 Bryan Bisordi was born in Seattle, Washington and was introduced to drums at an early age.
After graduating from high school, Bryan joined with hiphop act Othello and the Hipknotics, which led to a successful debut release and tour of Japan.
Bryan currently lives, teaches, and performs in New York City with a wide variety of musicians, including the Etan Haziza Trio, David Caldwell-Mason, and electronic outfit, Gyroscone.

I went through many drumsets until I played a set of Canopus Drums, and I knew I had found my sound. Canopus drums are beautifully crafted, have a deep, rich, and dynamic sound, and are made with amazing attention to detail.
The club kit is especially astounding, producing rich open tones usually associated with bigger drums. Sound engineers love them! Thank you Canopus!!