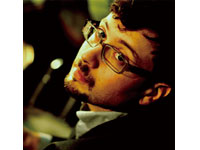 Benedikt Hesse, born in 1982, is an alumnus of the Drummers Collective New York City and studied with drummers like Robby Ameen, Adam Deitch, Vince Cherico, Ian Froman and Phil Maturano.
He is a very active player in Germany’s music scene and works in a lot of different musical settings from Jazz, Latin to Funk.
Known for his strong talent in Latin drumming he is currently performing with Latino Bands in Germany and Europe including LaPapaVerde, Chupacabras, Mambo Diablo and LatinJazzMafia.
Next to his work as a live and studio drummer Benedikt has an active teaching schedule and has been involved in band coachings and drum workshops.

Canopus drums provide a contemporary and versatile sound for todays ever changing music scene.
I'm very happy to play this awesome drumset - it just sounds killing!
Thanks a lot to everybody at CANOPUS for doing such a great job!