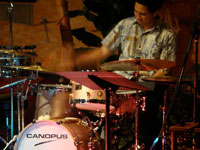 Multi-instrumentalist Abe Lagrimas, Jr. from Waipahu, HI, has been playing the drums since the age of 4. He was the grand prize winner in a competition sponsored by Modern Drummer Magazine to study at Drummer’s Collective in New York City at the age of 14.
As a high school student, he performed at the Kennedy Center in Washington D.C. as a participant of the Betty Carter’s Jazz Residency Program.
He then went on to continue his education at the Berklee College of Music in Boston, MA.
Abe has performed with Eric Marienthal, Lalo Schifrin, Eric Reed, Azar Lawrence, Jon Irabagon, James Ingram, Michael Ruff, and Jake Shimabukuro to name a few.
In 2011, he received a Na Hoku Hanohano Award, Hawaii’s most prestigious music recording award, for one of his albums. He currently lives in Los Angeles, CA and continues to perform throughout the world.

I will never forget the first time I played on a Canopus drum set. I immediately thought to myself, "What are these drums? They sound amazing!" Ever since then, I would see their drums pop up here and there at a venue wherever I was in the world. I was simply blown away at how great these drums consistently felt and sounded. As a lover of that vintage drum sound, I knew that Canopus were the only drums for me. They are the only company out there today who has successfully recreated that sound. On top of that, their drums look beautiful!