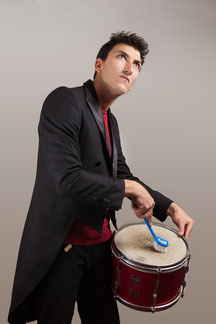 Stan is a drummer, percussionist, keyboardist and backing vocalist. As a professional musician, playing in the most reknowed French venues (Philharmonie de Paris, Days Off Festival, La Defense Jazz Festival, St Germain des Prés Jazz Festival, Théatre du Châtelet,…), he is very much appreciated by many musicians and ensembles for his versatility, his ability to play classical as well as pop, jazz, improvised music and musicals …‬

He studied classical percussion at the Conservatory of Tours then at the The High School of Music of Geneva. At the age of 21, he obtained both a Concert and Pedagogy Diploma. In parallel with his studies, he tried to explore new musical horizons: he was teacher in several music schools and at the same time he played with the Junior Ballet of Geneva and as additional percussionist at The “Orchestre de la Suisse Romande”.‬
‪‬‬‬‬
After his studies, he became percussionist at the French Air Force Orchestra of Paris and took an interest in jazz and modern music. He started playing in different bands and in 2009 he won the second prize for instrumentalist at “La Defense Jazz Competition” with EXULTET trio.‬ His versatility and his open mind allow him to play in classical Orchestra (Orchestre National de Lorraine, Orchestre National de Lille, Orchestre Lamoureux,…), in contemporary ensembles (Ensemble Intercontemporain, 2e2m, Paris Percussion Group, Le Balcon, Links Ensemble,…), as well as jazz bands (Babil Collective, Exultet, Melusine, Big One Big-Band,…), theatre and musicals (NEW, dAnseZ, Scènes de Mains,..) or with singers (Julien Clerc, Najar, Dawn, Marie S.,…).‬

Passionate about pedagogy and keen to convey his musical experience to young people, Stanislas is currently teaching percussions and drums at the Provincial Conservatory of Mantes la Jolie, and provides regular Master Classes and Clinics in several institutes in France and abroad (Bulgaria, P.A.S. Greece, Paris, Rennes, Nimes …).‬

Snare Drum Only / Accessory Only

This snare drum has the perfect sound for my working: Clear, round and precise!
It's very simple to change the settings, and i can use it in all of my different projects and in every situation (concerts, rehearsal, studio sessions,...)